The feeding of deer within the City of Iowa City has been banned following a newly-passed ordinance.

The feeding of deer has been banned for numerous reasons, including that fed deer are more likely to starve, can transmit chronic wasting disease, are more likely to be found in residential areas, and contribute to vehicle collisions.

The complete ordinance can be read online.

Based on preliminary information, a full-size sport utility vehicle lost control on the interstate, struck a pole, rolled over and ended up in the ditch.  Officers and firefighters arrived on scene to find an adult male victim that had been ejected from the vehicle.

Police officers, firefighters, and Area Ambulance Service personnel assessed the victim.  The victim sustained injuries that were incompatible with life and was pronounced deceased at the scene.

There is an ongoing investigation by Police Department accident reconstruction specialists.  The name of the victim is being withheld pending notification of family members.

U.S. Interstate 380 northbound between the area of 29th Street and 32nd Street NE will have lane reductions during the accident investigation process.

CEDAR RAPIDS, IA – Starting on Monday, September 28, 2020 the intersection of Center Point Rd and 29th Street NE will be closed for reconstruction. Work is scheduled to take approximately two months, weather permitting, and includes new pavement, sidewalk, curb ramps, traffic signals, and new utilities. The work is associated with the Paving for Progress Center Point Road project that started this spring. Improvements include replacement of pavement and traffic signals at the 29th Street intersection, medians on 29th near the I-380 ramps, and two-way conversion on Center Point Road between J Avenue and 29th Street (completed over the summer). The project is scheduled to be completed fall 2020. 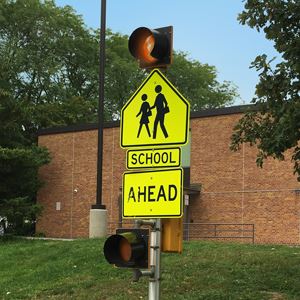 As students and teachers return to school in person, the Coralville Police Department would like to remind motorists and pedestrians to observe applicable laws near school zones.

School Patrol
Coralville officers patrol school zones before and after school every day to ensure the safety of our community’s children. Please do your part by obeying the law in and around our neighborhood school zones.

Iowa City/County Manager Association’s (IaCMA) Joe Lukehart Professional Service Award was created to recognize outstanding contributions to the development and support of the city management profession in Iowa. This award is named in honor of Joe Lukehart, who served as president of the Iowa City Management Association in 1981-1982. Joe served as city manager in Webster City from 1974 to 1982 and played an instrumental role in enhancing the professional development efforts of Iowa’s city managers and assistants. Throughout his career, Joe untiringly demonstrated his deep commitment to the city management profession, the manager form of government, and his colleagues in the Iowa City/County Management Association. During his tenure as president, the association reviewed the mission and established plans for enhanced development programs and membership services and thereby initiated what has become an ongoing process.

The award is presented to individuals who have promoted or enhanced the city/county management profession in Iowa, and who have made outstanding contributions to the Iowa City/County Management Association. Additionally, the award is given to individuals responsible for promoting the professional development of IaCMA.

Kelly has served as the City Administrator in his community for 30 years, a time of unprecedented change and growth, including doubling the city’s population. He serves as a member and president of the Iowa Municipalities Workers’ Compensation Association board; president of the Hawkeye Area Scout Council; the Salvation Army of Iowa City advisory board; the Iowa City Area Development Board and Executive Committee; Iowa City Area Chamber Board and the University of Iowa Alumni Association.

While serving the city of Coralville, he has overseen innumerable projects, including the development of Coral Ridge Mall, $70 million in flood protection funding, extensive brownfield grants that paved the way for the development of the Iowa River Landing.

Get your business listed on the Coralville Courier Search Directory!

Reach the corridor audience with a LOCAL search directory.  Get listed in the Coralville Courier search directory.  It's easy, it's direct, it's cost effective, it's LOCAL and mobile friendly.  And once you're listed, you're always listed.  That's right, no renewals, no sales calls, it's just a one-time $30 set-up fee to get listed forever and take advantage of unlimited updates!  You can change/update/add to your message at any time.   Running a special?  We'll post it.  Holding an event?  We'll post it.  Just want to say you had a great weekend, "Thank you patrons" or "Congratulations Hawkeyes?"  We'll post it!   We promote you online, it's what we do.

Your profile includes:  Your business listed with your logo, a profile narrative and a link to your website.   Then sit back and let your listing go to work for you.  Get your listing today, your new customers are waiting.

Simply enter your business name, click the 'Buy Now' button to submit payment and we'll get to work on your listing, it will be up and working for you in no time!

Your ad must be paid for in advance. We accept Visa, Mastercard, Discover, American Express through PayPal.    Checks are no longer accepted.

The Coralville Courier maintains the right to refuse/reject/edit/cancel ads and will not knowingly accept ads that violate the law. We assume all advertisements practice equal opportunity. Errors/omissions must be reported on the first day of posting by email to coralvillecourier@gmail.com. We are not responsible for any loss/expense that may result from the posting of an ad.

IOWA CITY -- Effective on Monday, September 28, 2020 Iowa City Transit will resume operating the AM and PM Eastside Loop routes for the 2020-2021 academic year. As a reminder, a face covering that covers the nose and mouth must be worn in order to ride Iowa City Transit buses.

The PM Eastside Loop route will begin service at the Regina Education Center (stop 7419) located on Rochester Avenue at 4:05PM on Monday, Tuesday, Thursday and Friday and at 3:05PM each Wednesday due to early release. The PM Eastside Loop route will arrive at City High School (stop 7602) at approximately 4:10PM and at Southeast Junior High at approximately 4:16PM (one hour earlier on Wednesdays).

IOWA CITY --- Weather permitting, beginning on Monday, October 5, 2020, lanes of traffic will be shifted on Clinton Street, between College Street and Washington Street, to facilitate the use of a crane for placement of materials on a rooftop in the area.  It is anticipated that normal traffic will resume by late morning.

Motorists are to take note of this work and allow extra travel time as delays may occur.  As always, caution should be exercised when driving through all construction areas.

IOWA CITY -- Weather permitting, on Thursday October 1, 2020, Sheridan Avenue will be closed to traffic between Summit Street and Clark Street to accommodate the replacement of a fire hydrant in the area.  Access to residences will be maintained at all times.  It is anticipated that normal traffic will resume by the end of the day.

Motorists are to take note of this work and seek an alternate route during this time period.  As always, caution should be exercised when driving through all construction areas. 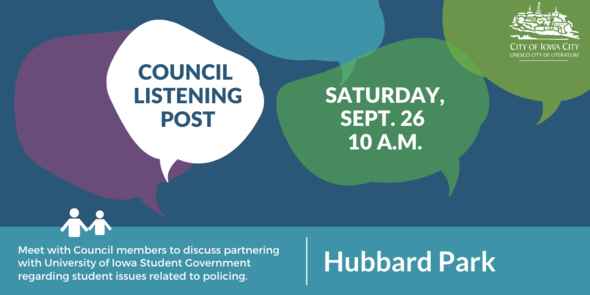 Members of the Iowa City City Council will hold a Listening Post on community policing at 10 a.m. Saturday, Sept. 26, 2020, at Hubbard Park.

The listening post will focus on partnering with University of Iowa Student Government (UISG) to DISCUSS student issues related to community policing.

What is community policing and how can I provide input?

Community Policing is a philosophy that seeks to address the root causes of crime, works to reduce fear of social disorder, and builds confidence in police through problem-solving strategies and police/community partnerships. It recognizes that law enforcement can rarely solve complex societal problems alone and that creative solutions and partnerships are needed to ensure the best outcome for all residents. Community Policing may mean many different things to different people. We look forward to hearing your ideas and thank you for your input and care for our community.

Please fill out the public input form to provide your thoughts on what you would like community policing to look like in Iowa City. This form will be available until October 15, 2020.

The final three of this series of City Council Listening Posts have been scheduled. More information about each event will be issued in the coming days. Alternate locations due to weather will be announced as needed.

Face coverings and social distancing will be required to participate in this event due to the COVID-19 pandemic and the City's face covering ordinance. The City will provide masks at no charge to participants who do not have one. Those who attend should also bring their own chairs, blankets, and water.

Want to lose some weight?